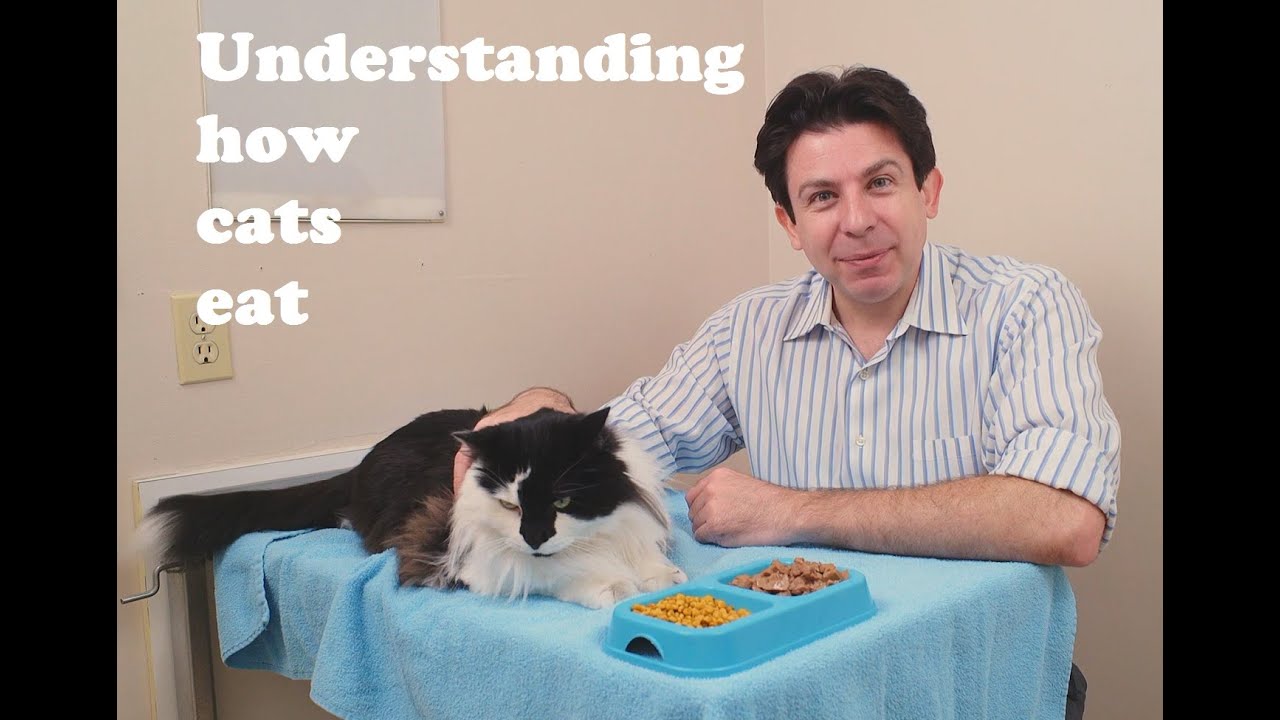 knowing a little bit about how cats think about food will help us understand how cats eat and how their history affects their eating behavior. please support on patreon https www.patreon.com hvvet some cute squishthatcat merch https www.redbubble.com people arbutuswest asc u squishthatcat https youtu.be oagfx7eb3ga is it ok to carry a cat like a baby https youtu.be wrdqmyxc8m cat names that get your cat s attention https youtu.be p3n76ogdj3i how to trim a cat s nails https youtu.be o1xisxbve8g how not to pick up your cat https youtu.be wnelah 2ijg in vancouver bc you can meet dr. uri and his team at arbutus west animal clinic www.awac.ca vancouver east veterinary clinic www.vancouvereast.vet acadia veterinary clinic http www.acadiavetclinic.ca

I have two cats who eat very differently, one is definitely a trickle eater while the other (younger guy) needs to finished both bowls if he can. I was wondering if you have any tips for how to deal with feeding in households with multiple cats who have multiple eating habits.

All 3 categories describe the feral rescue cat who lives with us. My son found him with half his face badly torn up, and he was severely underweight. So it was encouraged to feed him. One year later he had developed the habit of conserving resources. I didn't help prevent that, because I was serving a whopping measure and keeping his bowl full even as he continued to gain weight. So then he became overweight and I had to scale back, giving him only 3 smaller portions of a smaller measure of feed. That has seemed to work well, although he has not really lost weight. He is an orange male, neutered after my son found him (during his first eye surgery, poor guy). He was feral and must continue to "hunt" in our home. If his food dish isn't sufficiently full for his preference, he will attack me, although my son did train him to get my attention more politely first, but if I don't jump up fast enough, he goes full on feral. We have been working on waiting until every last kibble is gone before answering his call for food, and it's going ok. I just have to hide in the closet until his dish is empty so he won't attack me. (j/k -- I practiced planned ignoring). By the way, he eats his food in a round dish, so the center empties before the edges, and he tends to think that means the dish is empty. He's just beginning to check the edges after a year of shaking it to show him there's food there. It's pretty funny. And yes, he will only eat when we are present. We don't have to watch him, but we must be near. So first thing in the morning, whoever is up first has a cat on the heels. Our schedules vary, but when we're both gone all day at work, whoever gets home first is greeted by a cat who acts relieved as he heads straight for his food dish after not having eaten all day. And the funniest thing is that I cannot sit down to eat without drawing a cat to my side at the table. It doesn't matter what I prepare, meat or vegetarian, he is right there demanding to try some. Sometimes he's groggy from sleep and drooling as he demands to sniff what I have. And if I don't give him a sniff, he acts like the schoolyard bully snatching it from me. I've learned to prepare a tiny crumb for his sniffing pleasure. And I do mean "sniff" -- he doesn't eat it, he just wants to smell it. Then he goes to his own dish. One of the reasons we decided to keep him is because he's a handful, and not likely to be adopted by anyone else. It has been a remarkable journey from feral to domestication, really.

How did you make that cat disappear? Amazing!

Thank you so much for sharing your wisdom with us😹